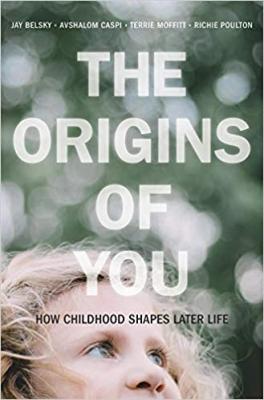 In The Origins of You, SRCD member Jay Belsky and co-authors Avshalom Caspi, Terrie Moffitt, and Richie Poulton share what they have learned about childhood, adolescence, adulthood, about genes and parenting, and about vulnerability, resilience, and success.

Does temperament in childhood predict adult personality? What role do parents play in shaping how a child matures? Is day care bad—or good—for children? Does adolescent delinquency forecast a life of crime? Do genes influence success in life? Is health in adulthood shaped by childhood experiences? The evidence shows that human development is not subject to ironclad laws but instead is a matter of possibilities and probabilities—multiple forces that together determine the direction a life will take. A child’s early years do predict who they will become later in life, but they do so imperfectly. For example, genes and troubled families both play a role in violent male behavior, and, though health and heredity sometimes go hand in hand, childhood adversity and severe bullying in adolescence can affect even physical well-being in midlife.

Visit the authors’ page to learn more about the book

If you are using the book in your classroom, please contact the authors (tem11@duke.edu, ac115@duke.edu, or jbelsky@ucdavis.edu) to schedule a time to discuss it with your students.