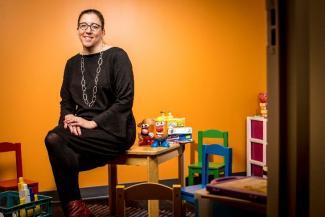 Dr. Olson is currently an Associate Professor and Associate Chair at University of Washington’s Department of Psychology. She is the Director of the TransYouth Project (TYP) which is the first large-scale, national, longitudinal study of socially-transitioned transgender children to date. TYP follows a cohort of about 300 children from 45 U.S. states and several Canadian provinces for 20 years.

“Kristina’s groundbreaking research is already changing how we understand gender identity and gender development,” said Dr. Laura L. Namy, Executive Director of SRCD. “Her work informs both mechanisms and real-world implications. We are thrilled that her work is being nationally-recognized on such a grand scale.”

She is the first social scientist to receive the Alan T. Waterman Award since 2005 and the first woman to receive the award since 2004. According to the NSF announcement, “Olson is recognized for her innovative contributions to understanding children’s attitudes toward and identification with social groups, early prosocial behavior, the development of notions of fairness, morality, inequality and the emergence of social biases.” The Award comes with a research grant of $1 million over 5 years and other recognition.

Dr. Olson says her work is important for all major societal issues -- from trade disputes to health disparities to international relations. "I believe it is impossible to solve any large-scale social issues without documenting, understanding and ultimately bridging differences in people’s racial, cultural, gender and other identities," she said.

Watch a video tribute to Dr. Olson and her research on the National Science Foundation website.