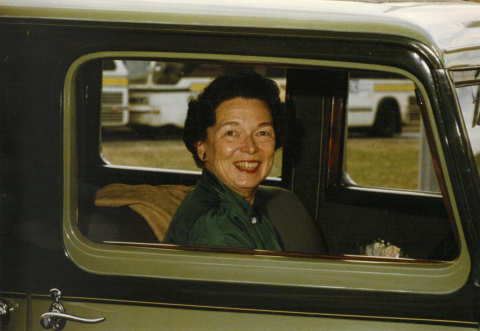 Her education included a B.A. from the University of Vermont (1947), an M.A. from Boston University (1949), and a Ph.D. in psychology from Northwestern University in 1951. She married Herman (Ike) Eichorn in 1947 and he served as chaplain at the State Hospital in Napa, CA for 36 years. Their son Eric grew up in Napa and now works at U.C. Berkeley. Dorothy served as a research psychologist at the Institute of Human Development (IHD) at the University of California, Berkeley, including administrative roles from 1952 to 1989.  Beginning in 1971 she became the Executive Officer of the Society for Research in Child Development and retired from this position in 1990.

Dorothy had a distinguished career at U.C. Berkeley as well as in the Society for Research in Child Development (SRCD). In the early years at Berkeley, as a young scholar she worked with established researchers who helped it become a world renowned institute for research on development, including the major contributions made by the Berkeley Growth Study (BGS). When Nancy Bayley left for a position at the National Institutes of Health (NIH), Dorothy began to work on the BGS. She also became director of the Child Study Center which opened in 1960, replacing the former nursery school. Her research also expanded during this time and her interests included physiological as well as psychological development.

While at Northwestern, Dorothy was introduced to SRCD by Tom Richards, a faculty member who also served as its business manager. When she moved to Berkeley, the prominent scholar and director of the IHD was Harold Jones, M.D., who was also president-elect of SRCD at the time. Dorothy had no formal training in developmental psychology at the time, but she joined SRCD because everyone at the IHD belonged and she became interested in developmental science. The first biennial meeting she attended was the 25th Anniversary meeting in Bethesda in 1959. She was actively involved in the Society during the 1960s. At that time, Margaret K. Harlow, faculty member at the University of Wisconsin and wife of Harry Harlow, the famous primatologist, became its business manager (title used then for executive officer). Margaret served until 1971, when she died of cancer and Dorothy was then recruited for this position, which she assumed later in the year. The executive office was then moved to Berkeley, and she and Vy Buck who was the administrative assistant for decades were the only paid staff. At that time the membership was under 2,000 and the budget was small. So Dorothy was paid part-time and continued with her appointment at the IHD at Berkeley.

During the almost two decades that Dorothy served as the executive officer of SRCD, there was considerable growth in terms of membership, journal subscriptions, and in the influence of the Society on the field of child development. Submissions to the journal Child Development increased several fold so the acceptance rate of articles became as low as 10%. The registration at the Biennial Meetings grew from a few hundred in New York City in 1967 to almost 2,000 at the 1973 meeting in Philadelphia. The 1970s saw the formation of several new standing committees, including the interdisciplinary committee, the history and archives committee, and the committee on social policy and communications. The Governing Council then established a satellite office in Washington D.C. to deal with the activities of this committee, including the establishment of SRCD Policy Fellows. In 1973, the Black Caucus of SRCD was founded with a commitment and support from the Governing Council, which continues to flourish today. Dorothy played a leadership role in all these new activities and found many ways, both formal and informal, to support the endeavors of each.

Another development in the 1970s was the establishment of several new, smaller organizations addressing more specific issues of child development. In 1969, the International Society for the Study of Behavioural Development was founded, and Harold Stevenson who was president of SRCD in 1971, served on the founding board.  He and Dorothy both worked cooperatively to facilitate the growth of this organization, which also established its own journal, International Journal of Behavioral Development. The International Congress of Infant Studies was founded in 1978. This group established its own journal as well, Infancy, since there was so much work being conducted on infancy that there was a perceived need for another outlet. Dorothy attended all of their meetings and offered the assistance of SRCD. A third group, the Society for Research on Adolescence was established in 1984, dedicated to this then fast-growing age span of development. By the 1990s SRCD became the organization that actually oversaw this group, as well as its biennial meetings.

By the time that Dorothy turned the reins over to John Hagen in the Fall of 1989, the Society had a membership of over 4,000, an annual budget of nearly one million dollars, and a substantial investment portfolio. It was especially remarkable that Dorothy was able to successfully accomplishment all these things with the same staff of two at the office at U.C. Berkeley. She was devoted to her many involvements and was always positive and jovial in her interactions with all. She said often, when some members complained that SRCD was becoming too big, that its mission required that it grow and acquire new resources and that SRCD belonged to the field rather than its members. Her contributions continue on today.