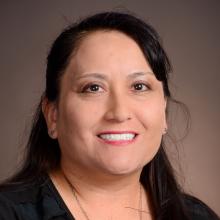 After college, I worked with youth directly as a supervisor for a residential treatment center and then as a Juvenile Probation Officer. This work convinced me that we needed to do more for children. We do very little to address the dire circumstances many are in – instead we punish them. I decided to go back to school to do research to advocate for all children living with trauma and poverty with a special focus on Native American children due to being an enrolled member of the Zuni Nation myself.

SRCD has been very influential in my career. While still a graduate student, I read about funding being granted to Dr. Nancy Whitesell and Dr. Michelle Sarche to host a special conference dedicated to Native American Children so I reached out to them and have been closely affiliated with them throughout my career. Due to this connection, I became one of the first Native Children’s Research Exchange Scholars which helped me move my research from a general focus on memory to finally being able to follow my heart and concentrate specifically on Native American children’s cognitive development in both reservation and urban settings.

I also landed a post doc at UC Santa Cruz with Dr. Barbara Rogoff due to SRCD. At my first SRCD conference, I presented my research on Urban American Indian mothers. I talked at length with a professor I did not know (crazy right – I did not know Barbara Rogoff!) so when she casually mentioned that she was doing a book signing and I should stop by later, I was absolutely shocked and delighted to find out who she was. I reached out to her after the conference to tell her what an impact she had on me and she told me she had a postdoc available if I could earn my Ph.D. by April. I had not even started data collection, but I made it happen. The moral of this story, is present your research, talk to all of the people who stop by your poster/session, and follow-up with them.

What does participating in an SRCD Committee mean to you?

I just became a member of the Ethnic and Racial Issue Committee (ERI) this year. It is still very new to me, but I am excited about this opportunity to advocate for more inclusion of Indigenous voices and research in the US and around the world. I would love to see more research on Indigenous children featured in Child Development and Child Development Perspectives.

Well, I already mentioned three of them, but I will add Dr. Marigold Linton. She was the first to reach out to me and offer guidance and support. At the time, I was a beginning graduate student in psychology at the University of Kansas in the cognitive program. Legend has it that Marigold was the first American Indian cognitive psychologist. Marigold has always been a wonderful resource for me, because as the first Ph.D. in my family, I had no clue what I was getting into. She has really helped me stay on track and has provided me with leadership training through the Society for the Advancement of Chicanos and Native Americans in Science. I have yet to take on a leadership role with SACNAS, but I know I will someday. Being on the ERI is a step in the right direction.

What words of wisdom might you pass on to someone on their very first day after deciding to get a Ph.D. in developmental science or related?

Listen to your heart and pursue research topics that you are passionate about. It isn’t easy, but when you get to work in your communities, with your people, and make a difference in their lives, it makes all of the hardship worth it.